Do you know about the sardine that blocked the port of Marseille?

As I was perusing local postcards at a local flea market in Provence, I came across a curious image. The postcard depicts an enormous sardine blocking the port of Marseille. The seller, taking advantage of my ignorance and confused expression, insisted that this indeed did happen.

I asked Patrice, the local market fisherman, and he told me the whole story of how a tiny sardine managed to block the beautiful port of Marseille.

In 1778, Britain and France were once again at war due to France’s allegiance to the American cause. Britain started seizing French-held Indian lands. The French, ill-prepared, managed to defend the town of Pondicherry for 10 weeks enduring heavy losses. Seeing as they were outrageously outnumbered, 10 weeks is impressive!

After the French capitulated, the survivors were allowed to return to France unharmed. On May 1st, 1780, one of the French ships, Le Sartine, found itself off the coast of Portugal when it was hit by a British ship, the 50 gun HMS Romney. The French captain and 2 other men were killed and the ship was significantly damaged. The English then realized that the ship was, in fact, supposed to be unharmed. They let the Sartine head home to France without further damage. The miscommunication is still a mystery. If only they could have sent an text!

It seems that the replacement for the deceased French captain found himself in a horribly embarrassing situation. Lacking the skill needed to enter the tricky bottleneck port of Marseille, he ran the ship aground right at the entry into the port, therefore blocking it entirely. All maritime traffic was halted for some time. You can just imagine all the French arm waving and gallic shrugs happening at this point. 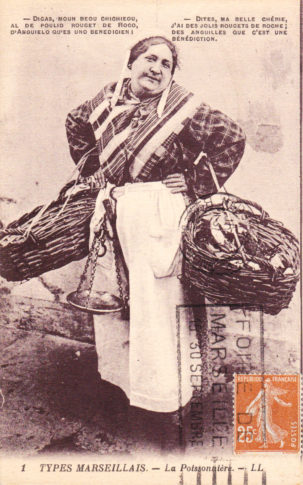 I would not want to mess with this fish seller… A postcard from my collection. 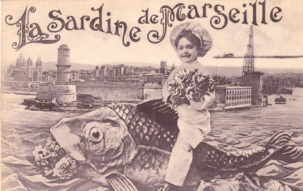 This event was such a nuisance for the locals that to this day, the saying about the Sartine, humorously changed to sardine, that blocked the port of Marseille is common knowledge throughout France. However, outside Marseille, the story is used as an illustration for the lengths of exaggeration the Marseillais will go to when they tell a story. 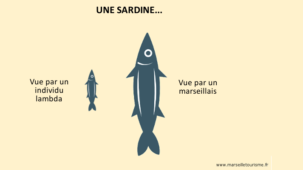 Every so often, you’ll come across a fabricated story, complete with a photoshopped sardine, to say that indeed an 11-metre long sardine was found off the coast of Marseille. The headline will claim “the legend is true!!”

Sadly, it was the Sartine ship and not a freakishly large sardine that blocked the port of Marseille. 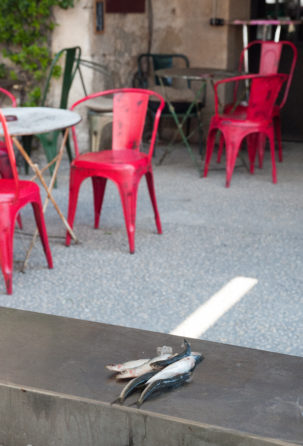 Sardines on the fish stand of Patrice at the Eygalières market in Provence.

I much prefer the fishy version. 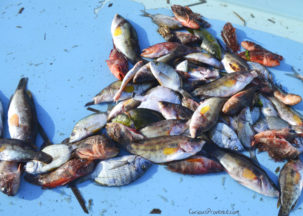 Fresh fish for sale at the daily market on the port of Marseille.

This site uses Akismet to reduce spam. Learn how your comment data is processed.

Follow us for daily images of life in Provence!

Curious and Fun French lessons delivered to your inbox every day. Only ten minutes worth of French grammer (it’s best in small portions) delivered in the framework of a cute story (involving none other than Victor Hugo) which actually makes new vocab much easier to remember.

Sign up for HouseSitMatch if you’d like to put up your house for housesitting or house sit yourself. A great way to see the area on a budget!

It’s ok to drink rosé with ice cubes in Provence, it’s called a Rosé Piscine (pool of rosé…always served in a big glass of course…

Click on the image below to see reviews on Tripadvisor for CuriousProvence Experiences!